The campaign highlights the global issue of gendered violence and the atrocities that so many people are still facing today from every corner of the world. 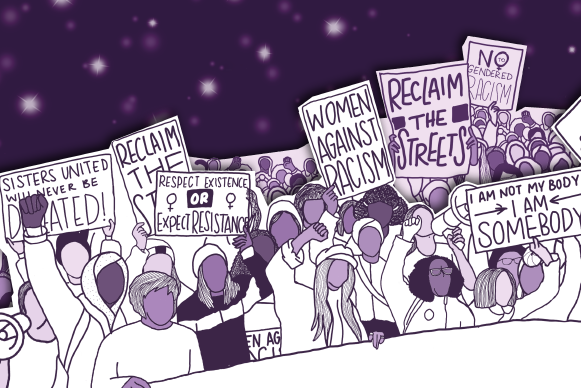 16 Days of Activism Against Gender-Based Violence is an international UN campaign to challenge violence against self-defining women and girls. This campaign runs every year around the world from 25 November, the International Day for the Elimination of Violence against Women, to 10 December, Human Rights Day. Like previous years, Sheffield has once again put together a fantastic programme of events for these two weeks focusing on issues faced by women.

One in three self-defining women worldwide experience gender-based violence. When we intersect those figures with other identities such as trans women, or for women of colour, these figures are almost always higher. We are taking these 16 days to highlight three core themes - state violence against women and the criminal justice system, safe sex work, and the intersections between disability and gendered violence.

The global pandemic has highlighted the sheer numbers of women who consistently experience violence and domestic abuse on a day to day basis. Whilst a physical march cannot take place, our fight against gendered violence continues. This year Lily the SU Women’s Officer is calling on you, the self-defining women of Sheffield, to Reclaim The Space. 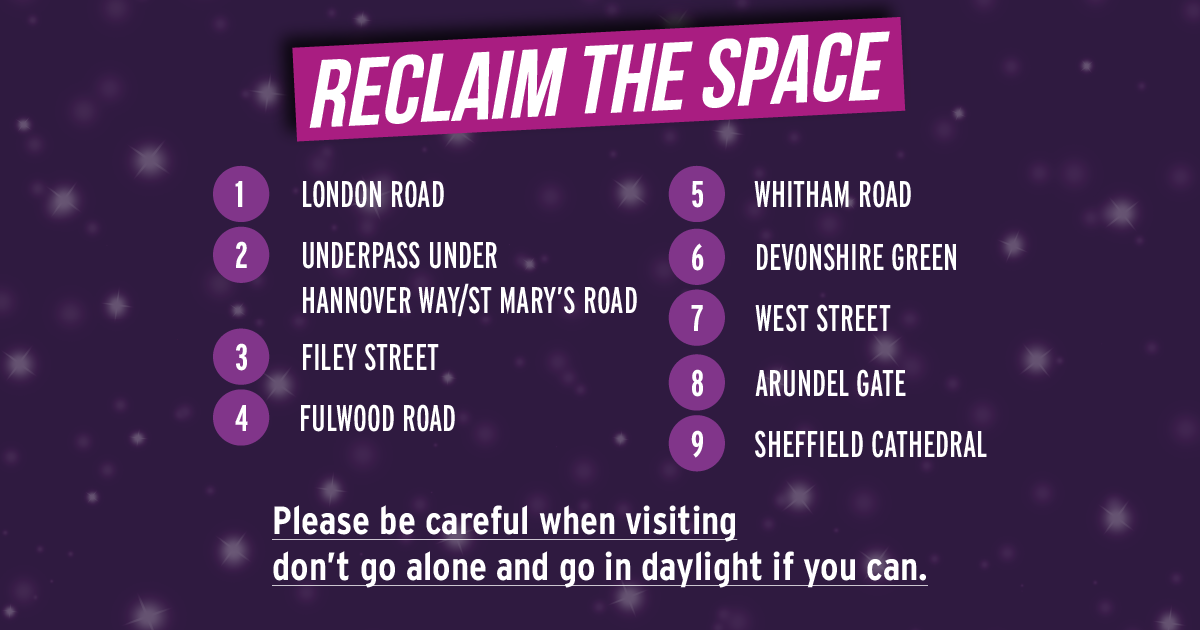 From now, until the 8th December, we want to get out and protest in different areas around Sheffield, and to reclaim areas of our city which we’ve previously felt unsafe in. Sending in your pictures and images, we will create an online collection to show both our solidarity with victims, and our strength against the violence. Send in your photos to womens.officer@sheffield.ac.uk or @sheffsuwomensofficer on Instagram in a direct message.

Please do not attend these spaces alone and we encourage you to go in the daytime. 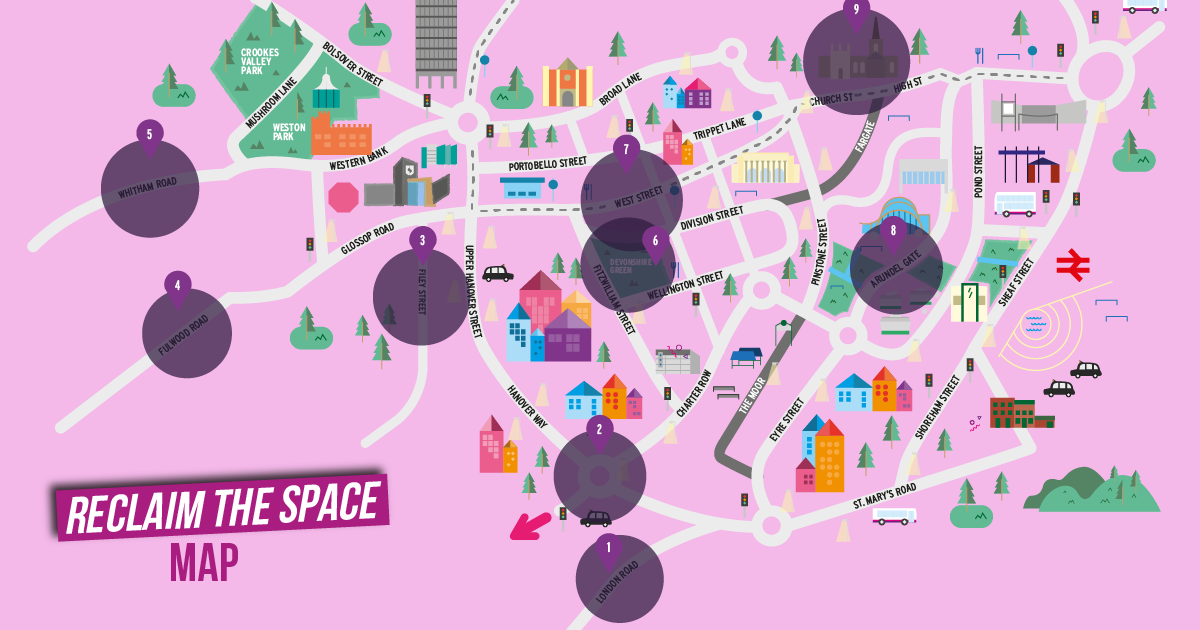 The Reclaim the Night typically kicks off our 16 Days of Activism against Gender-Based Violence campaign, a UN initiative aimed at highlighting the pervasive nature of gendered violence in our society. The aim of this annual protest is to resist violence against self-defining women, empowering women to come together to reclaim the streets of Sheffield. Even in 2020 women are denied the right to safety, and we are still blamed for rape and gendered violence.This year we are focussing the march on ending the normlaisation of sexual violence and saying no to gendered racism. This is in response to the growing levels of xenophobia and racism in society.

The Women's Committee and Fem Soc are hosting an online banner making session as part of our digital rally for Reclaim the Night! We're asking students to take photos of their artwork in different areas of Sheffield to create an an online collection of feminist action. Bring your art materials and join us on Google Meet to create some feminist-inspired posters and banners.

Check out Our Bodies Our Streets for more information!

Our Bodies Our Streets

SAYiT are holding an online vigil at 5.30pm on Friday to remember and honour the lives of trans and gender-diverse people whose lives were lost in acts of anti-transgender violence in the past 12 months.

Join us online for a range of speakers, including members of the trans community and representatives of local trans and LGBT+ organisations, followed by a minutes silence to mark those we have lost this year.’

Sadly, due to the government restrictions, a physical march for Reclaim the Night is unable to take place. This does not, however, mean that our campaigning for women’s freedom against gendered violence is halted. Join us on Saturday night at 6pm for our virtual rally. We will hear speeches, poems and thoughts from our amazing student body. Whilst we cannot have a physical march this year, this digital rally will be a reminder of our fight against gendered violence and the incredible strength of the women of Sheffield. Link will be posted on the Facebook event.

As part of 16 Days of Activism Against Gendered Violence, Women's Committee and your Women's Officer Lily are hosting a discussion with the ECP. We'll be talking about stigmatisation of sex work, the type of violence sex workers experience, and the effect that COVID19 has had on the industry. Please join us for an insightful and important conversation.

A Conversation with the English Collective of Prostitutes

Join the Women's Committee and your Women's Officer Lily for a panel-led discussion about gendered violence and the effects of COVID19. This event will include speakers from Women In Prison (a national organisation who support women affected by the criminal justice system) and two local charities, Sheffield Rape Crisis Centre and the DEWA Project. We are privileged to have the involvement of these organisations, and this event is an amazing opportunity to find out more about the experiences of different women.